It is now one year since the 99th Expeditionary Reconnaissance Squadron (ERS) began to move from Al Dhafra airbase in the UAE to RAF Fairford in the UK. Since last November, the squadron has been busy flying operational missions in an eastward direction. The usual sensor fit is the ASARS imaging radar plus the ASIP SIGINT sensor, with the Extended Tether Pod (ETP) relaying the collected data to the Distributed Ground System (DGS) in the US by satcom, for processing, exploitation and dissemination (PED) by ground stations. The SYERS multispectral imager has occasionally replaced ASARS.

Fairford is an RAF base in name only, since it is operated by the USAF. It houses occasional deployments of B-1s, B-2s and B-52s. Fairford is best known for staging the annual Royal International Air Tattoo (RIAT), which is the world’s largest military aviation airshow. Read my story on how the U-2 participated in the 2017 airshow here.

The 9th Wing has used Fairford for years as a staging base for the flights codenamed “Busy Relay”. This is when U-2s from Akrotiri and Al Dhafra returned home for depot maintenance at Palmdale. It was last used for operational U-2 flights in 1995, when Operating Location – United Kingdom (OL-UK) flew over the Balkans during the civil war there, using three jets.

Today’s 99th ERS has only two U-2S on strength. Nevertheless, it is flying a busy schedule. One aircraft is dedicated to operational missions, while the other is kept in the ‘slick’ configuration without sensors, and used for pilot currency flights.

The nickname Arctic Dragons may be a reference to the British climate, which is considerably cooler than that enjoyed by 9th Wing personnel at their home base, or at the 99th’s previous base in the desert. It could also refer to a mission reaching northwards all the way to the Barents Sea, to monitor Russian military activity in that strategic area. (For a very good description of how such 10-hour flights were mounted from the UK forty years ago, see pages 188-193 of “Shady Lady” by Rick Bishop).

However, most 99th ERS missions have been in the Baltic Sea region, to monitor an area where East-West tensions are on the rise. These are normally eight-hour flights, and they sometimes coincide with NATO exercises in that area, when Russian defenses are most likely to be active and emitting.

Being a British airbase, Fairford is often surrounded by aircraft enthusiasts observing the action with their radios and photo equipment. The personnel of the 99th ERS obviously have a sense of humor. They have designed their informal ‘Friday’ patch and the ‘pencil pocket’ patch that is worn on the arm of their flightsuits, to show long camera lenses poking over the base fence! The formal 99th ERS patch features a fiery dragon (of course), and is topped by a crown to acknowledge the British basing. 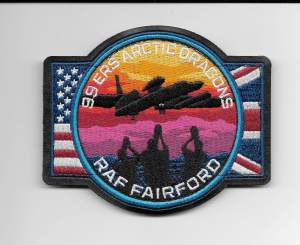 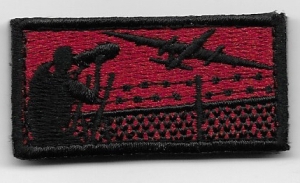