The Dragon Lady was fitted with fixed modern cockpit displays 15-20 years ago, making piloting much easier on missions, including communication and navigation. But as the years passed, the cockpit upgrade increasingly lacked compliance with FAA/ICAO civil navigation procedures. Moreover, portable electronic devices flourished, and they were adapted for use by civilian aviators. Now, U-2 pilots are taking iPads, ADS-B receivers and ‘smart’ watches with them when they fly.

By the time that the U-2s received their ‘glass’ cockpits in the early 2000s (above), small GPS receivers were already ubiquitous. Garmin became the most popular supplier, and by the time of the U-2 cockpit upgrade, the company had already sold three million GPS receivers. It had also become a key supplier of cockpit displays for commercial aircraft.

Garmin was not involved in the U-2 cockpit revamp, and nor was their competitor Trimble. But they both supplied hand-held receiver/displays for the Dragon Lady, and for the T-38A jets that the 9th Wing uses as “companion trainers” to the U-2 for proficiency flying and check rides. Unlike the rest of the US Air Force T-38 fleet, the ones at Beale were not upgraded with a ‘glass’ cockpit; had no GPS, and only basic navigation radios.

The first portable GPS receiver used by U-2 pilots was the Trimble FlightMate in 1993 (left). This was before the jets were even equipped with a built-in GPS in the mid-1990s. Then pilots were progressively supplied with Garmin 196, 296, 396, 496 and 696 devices

(496, right). As well as a moving map, they provided displays of basic flight data; navigation; weather; flight plan and waypoints; and terrain warning. Their battery power was backed up by converting the power port for the cooling fan in the U-2 cockpit. 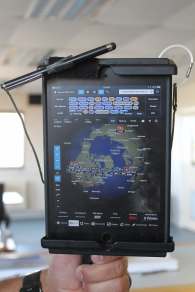 In the civilian world, 2010 saw the debut of ForeFlight, a comprehensive flight-planning application for Apple’s touchscreen mobile devices. Private and commercial pilots quickly embraced it on the iPad (right). Additional functionality quickly followed, including terrain hazard and weather map overlays, and wireless connectivity with the onboard avionics. In 2013, data from the handy Stratus ADS-B receiver (below, left) was integrated. In 2014, hard-wire connections to the onboard avionics were added. In 2016-17 came better presentation of aeronautical charts, and a flight planning function.

Meanwhile, Garmin had unveiled its D2 GPS watch for aviators (above, right). It could display ground track, bearing, distance-to-go, height, glide ratio, and more. When wirelessly connected to a mobile device running applications like ForeFlight, it could load flight plans and create waypoints. Over the next few years, more features were added as these watches became popular, including the cockpit connectivity to display air data.

In 2016-18 the GPS receivers and iPads that had revolutionized civilian pilotage arrived at Beale AFB, followed by the watches. They had been acquired directly by the 9th Wing, rather than through traditional Air Force acquisition processes. This unusual initiative was supervised by the commanders of the 99th Reconnaissance Squadron, Lt Col Michael Gilmore followed by Lt Col Matt Nussbaum. A number of their pilots helped to implement the new mobile devices. They were tested in the altitude chamber at Beale, to ensure they were reasonably safe at up to 80,000 feet pressure altitude.

Staff officers at higher headquarters were not happy about the developments, and tried to prevent them. “Disruptive innovation or change almost always comes with pushback,” said one of the senior Beale pilots involved in the developments. But Gen Mike Holmes, the leader of Air Combat Command, was in favor. The scheme was also endorsed by no less than Air Force Chief of Staff Gen David Goldfein. They evidently agreed that, as the senior pilot said, “it’s really important to foster and recognize a culture of finding a solution rather than waiting to be issued with one.”

The iPads found their place on the U-2 as a backup navigation tool (above), replacing the Garmin 496s and providing a host of additional functionality that civilian pilots had been enjoying for years. A mount was added on the left cockpit canopy rail. For security reasons the iPads cannot not be connected to the aircraft’s avionics. But they can be wirelessly connected to a Stratus receiver mounted just forward of the canopy rail. On long unclassified missions such as ferry flights, they can be connected to the aircraft’s power supply.

Now, if the avionics processor should fail, U-2 pilots have a ready alternative. The ADS-B receiver provides an artificial horizon, pressure altitude sensor and flight data recorder. It also provides situational awareness of other traffic during climbout and descent. (Deconfliction has not been much problem at the U-2’s operating altitudes, although Google’s Loon balloons for internet relay are causing increasing concern to the high-flyers!).

The receiver can also serve as a backup if GPS signals are jammed by the unfriendlies. That’s because it seeks and integrates the signal from other satellite navigation systems such as Europe’s Galileo and – ironically – Russia’s Glonass and even China’s BeiDou!

Another useful function is provided by a small GPS/satcom device that the pilot can also take onboard: the Garmin InReach (right). During long training or ferry flights that are unclassified, it provides positional updates to his support crew on the ground, via a commercial website. The pilot can compose text messages on the iPad and send them via this device.

The iPads could be further enhanced. The 99th RS has invested in Apple’s courseware for the development of new apps, so that it can produce customized software in-house. For instance, a takeoff and landing distance calculator has been developed for the T-38.

The Garmin watches cannot be worn with the pressure suit. But the ‘back-up’ or mobile pilot found them a useful aid to setting up the cockpit for flight, after one of the pilots wrote a ‘widget’ app for that purpose. On ‘low’ U-2 test or training sorties when pilots don’t wear the pressure suit, and also when they fly the T-38, they can wear the watches. The data that the watches collect can be used for flight debriefing.

On the T-38 (left), in case of avionics failures, the watches provide a useful ‘get me home’ or divert function. They have the worldwide ICAO database integrated, which makes navigation to any waypoint easy. The iPads allowed T-38 pilots to quickly comply with ATC instructions that required GPS fixes and precision.

On operational U-2 missions, the watches must be stored, but could prove useful to a pilot for ground survival, if he has ejected from the aircraft.

But amidst all this modern wizardry, one navigation tool on the Dragon Lady is typical of the ‘belt-and-braces’ approach that has characterized its long history. Before every flight, a large map chart is prepared showing the intended route, and listing waypoints, divert airfields and emergency procedures. It is taped to the canopy sunshade above the pilot’s head. “It’s just an aid to give pilots more information quickly,” shrugged one pilot. “Might as well put some useful information in that otherwise wasted space.”

One thought on “INNOVATION IN THE U-2 COCKPIT”